Could Adam and Eve divorce?

Would it have been possible for Adam or Eve to secure a divorce?  This hypothetical question can be quite helpful because today’s marriages are described using the same language used to describe the union between Adam and Eve. 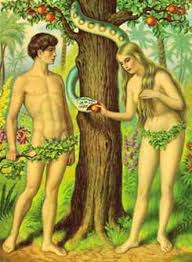 In response to a question about divorce, Jesus said:

Mat 19:4-6 ESV He answered, “Have you not read that he who created them from the beginning made them male and female, (5) and said, ‘Therefore a man shall leave his father and his mother and hold fast to his wife, and the two shall become one flesh‘? (6) So they are no longer two but one flesh. What therefore God has joined together, let not man separate.”

In what sense was Adam and Eve ‘one flesh’?

Gen 2:21-24 ESV So the LORD God caused a deep sleep to fall upon the man, and while he slept took one of his ribs and closed up its place with flesh. (22) And the rib that the LORD God had taken from the man he made into a woman and brought her to the man. (23) Then the man said, “This at last is bone of my bones and flesh of my flesh; she shall be called Woman, because she was taken out of Man.” (24) Therefore a man shall leave his father and his mother and hold fast to his wife, and they shall become one flesh.

Adam did not leave his father to be married to Eve and through sexual intercourse become one flesh with Eve.

Rather, Eve was literally made from Adam’s flesh and bone. Eve was made from Adam. There were two people but only one flesh since both people came from the one physical human body.

So, could Eve ever cease to be ‘one flesh’ with Adam? Could she unjoin what ‘God has joined together’?

The answer is an emphatic ‘No!’. Eve could no more separate herself from Adam than I could separate myself from my own DNA. Eve was made from Adam. Every cell in her body originated from Adam. She and Adam were one flesh and there was no way in which that joining could be undone.

This has clear implications for marriages today. Those who divorce their spouse believe that they have successfully separated what God has joined together. But they can no more separate from their spouse today than Eve could separate from her’s in the garden. This is the wonder of marriage – God intimately joins two people together in an indissoluble bond that cannot be undone ’till death do us part’.

Yet, as wonderful as this human bond is, it is only symbolic of the eternal and indissoluble bond that Christians (those betrothed to the Lamb) will one day receive at the great marriage supper of the Lamb.

2Co 11:2 ESV For I feel a divine jealousy for you, since I betrothed you to one husband, to present you as a pure virgin to Christ.

Rev 19:7 ESV Let us rejoice and exult and give him the glory, for the marriage of the Lamb has come, and his Bride has made herself ready;